That’s a lot of ADHD punctuation but all for a good cause. John and Maggie Durant, the brother-sister team who have become national leaders of hunter-gatherer athleticism and also helped mastermind our epic Harlem-Brooklyn Barefoot Run, are about to stage an encore: The 1st Annual New York City Barefoot Run, an event which Vegas odds already have at even money to become the Woodstock of Wild Human Animal Mayhem. Just look at who’s going to be there:
*Dr. Daniel Lieberman, “The Barefoot Professor,” who — while secretly disguised as the mild-mannered head of evolutionary biology at Harvard University — helped create the groundbreaking “Running Man” theory of human development and gave credibility to all us oddballs darting about in bare feet.

*Barefoot Ted McDonald: Fresh from his star-turning adventures in “Born to Run”, Barefoot Ted has been teaching his technique across the U.S. and Europe and recently smoked the Leadville Trail 100 in a pair of his own handmade huaraches — The Lunas — only taking them off, according to logic only logical to Ted’s Higher Monkey Consciousness, to climb the nastiest summit on the course in his bare feet. 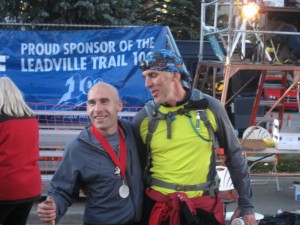 BFT and me, his pack mule for the final four hours at Leadville.

*Erwan Le Corre: creator of MovNat, the natural movement technique that has wowed everyone from Brazilian jiu-jitsu fighters to NASA astronauts-in-training.

The only thing wrong with this event, as far as I’m concerned, is that I can’t make it. So go, have a blast, and make me squirm with jealousy. Everything you need to know is here, including a killer flyer that I wish I could figure out how to embed.