I know why I got such a jolt out of iskiate, the Tarahumara’s Stone Age energy brew, when I was down in the Copper Canyons — I was dehydrated and hurting for calories. So was Carl Lumholtz, the great Norwegian explorer, when he explored Tarahumara country in the 1800s and took his first stunned swallows:
“I arrived late one afternoon at a cave where a woman was just making this drink,” Lumholtz wrote. “I was very tired and at a loss how to climb the mountain-side to my camp, some 2,000 feet above. But after having satisfied my hunger and thirst with some iskiate,” he went on, “I at once felt new strength, and, to my own astonishment, climbed the great height without much effort. After this I always found iskiate a friend in need, so strengthening and refreshing that I may almost claim it as a discovery.” 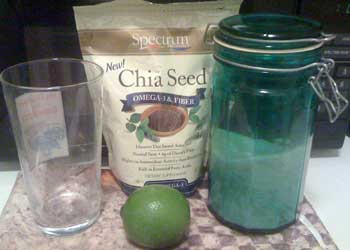 Recently, New York Daily News columnist Lauren Johnston has been experimenting with her own home-brewed Tarahumara Red Bull. Her reaction mirrored mine: You seriously expect me to drink this gunk?, followed by Holy moly! It works!
Meanwhile, over at Runningquest.net, Clynton adds his own gourmet version.