The end to road rage, Panda Express and middle seats

”I’m always a hopeful kind of guy,” says Bothwell, who has been in regular contact with Yoeli’s design team for the past two years. ”By 2010, I can see us having five or six X-Hawks in our fleet.” But by then, Yoeli reckons, you may already have one in yours.

Six MIT studs are making more than just themselves look smart. Six years ago, I wrote a story for the New York Times Magazine about the race to create the first road-worthy, flight-approved, buy-one-yourself, flying car. A handful of independent dreamers were cranking away on their own designs, each aiming to come up with a vehicle that was small enough to park in your garage, speedy and stylish to drive on the highway, yet aerodynamically engineered to unfold its wings at the push of a dashboard button and take flight. It was a vision almost too delicious to entertain. Instead of fuming in traffic and fidgeting in check-in lines, you could just zip along to your tiny nearby airfield, pop a button on the dashboard, and settle back as your car transformed into a Jetson-jet.

So when would this dream come true? 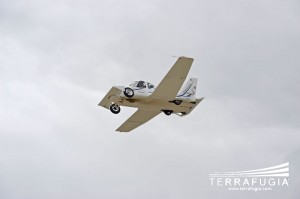