“It’s like having a tire with a nail in it.” —Nike’s top coach, on heel-striking

If two of America’s greatest runners can get healthy by getting off their heels, why shouldn’t you? Three years ago, Alan Webb was one of the world’s best milers. In 2007, he ran the fastest time in the world in both the mile and 1500 meters. Then he began to get injured and sank into a slump. Recently, as the Portland Tribune reports, he put himself into the hands of Alberto Salazar, the distance running legend who’s now head of Nike’s elite training program. And one of Salazar’s first moves? Just as he did with Dathan Ritzenhein, Salazar immediately got Webb to begin running barefoot-style.

Webb was also landing on his heel, in effect slowing himself down.
“We want to eliminate his braking motion,” Salazar says. “We want to no longer detect any forces coming back. With Galen, there are no forces going back. With Alan, there still are. It’s like having a tire with a nail in it. 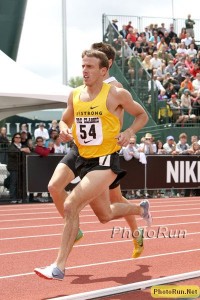 Curiously, Webb was once known for appreciating the benefits of a bare foot. When I interviewed him back in 2005, he told me that in high school, he was a size 12 with a flat foot and constant injuries. After his coach got him doing barefoot drills, his feet began to transform: by the time he graduated, Webb told me, he was a size 9 with a raised arch and no more ailments.

So what went wrong? Same thing that happens to the rest of us: he aged, he got bigger, he got a little sloppy. As Salazar puts it,

As he got older he gained too much muscle weight and his form got worse.

Salazar is making it clear that graceful running is a skill you can learn and perfect, not some rare genetic gift you’re either granted or denied at birth, like a single purple eye. Makes sense, right? The first time you try chopsticks, you’ll spray fried rice all over the table. Practice, and you’ll become quick and efficient. Children in Beijing aren’t any more hardwired for digital dexterity than kids in Boston; they just pick it up by application and necessity. Now contrast Salazar’s belief — that there are good and bad ways to run, and the only difference between them is logic and practice — with the doomed sense of predestination you get from comments like these, as Amby Burfoot watches Haile Gebrselassie:

The truth is that Haile’s stride is a gift delivered to him the day he was born. He has a combination of muscle-fiber types, tendon springs, and body-length ratios that are unique to him. He never had to practice his running form; it’s simply the way he runs because it’s the way he was born to run.

Seriously — the greatest distance runner in history never thinks about what he’s doing? Van Gogh obsessed over his draftmanship; Michael Jordan fired up thousands of jump shots a day in the off-season and formed “The Breakfast Club” during the Bulls’ championship seasons for pre-workout workouts; piano virtuoso Vladimir Horowitz lamented that, “If I don’t practice for a day, I know it. If I don’t practice for two days, my wife knows it. If I don’t practice for three days, the world knows it.”  They weren’t born with their dexterity — they earned it. Likewise, maybe we’ll never run as fast as Geb, but as Salazar is teaching Webb and Ritz, there’s no reason we can’t run as well as Geb.

**Update: Check out this Runner’s World report on the same story. Notice what’s conspicuously absent? You’ve got junk food …core strength …splayed feet… Hang on, what happened to the “tire with a nail in it”? Where are Salazar’s remarks about the “braking motion” caused by heel-striking? It’s really odd that RW missed the single most important comment Salazar made — unless it’s because it tarnishes cushioned running shoes. Salazar isn’t a fan of burgers, but he didn’t finger Double Whoppers as the major factor in deflating Webb’s tires; he blamed the heel strike.