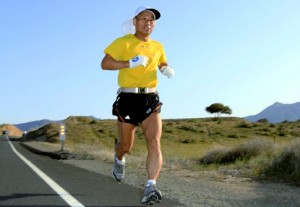 Catch him while you can

Yijoo Kwon, the 64-year-old diabetic who began beating his disease the day he began running, is still blazing across the U.S. on his solo transcontinental run. He expected to be back home in Queens by July 9, but he’s moving so fast, he’ll almost certainly be early. He’s in Ohio right now, but at an average pace of 34 miles a day, he won’t be for long. Scroll to the bottom of his website to locate him. And if you can get out to cheer him on, hand him a popsicle, or join him for a few miles, you’ll be part of something extraordinary.