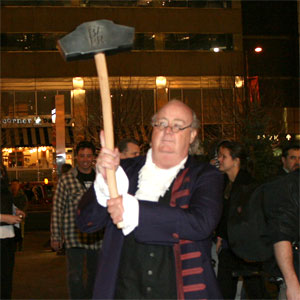 In all its hammerous glory.

America’s coolest running club, the Fishtown Beer Runners, has been chosen as honor guard for the glorious Hammer of Glory in the final stage of its journey across Philadelphia for the opening day of Beer Week. The HOG is Philly’s official keg mallet, and by time-honored tradition, it will be passed Olympic style across the city from hand-t0-hand, except instead of being attached to broken-down ex-athletes, those hands will belong to strippers, booze hounds, mad inventors, tricyclists, sculptors, Rocky look-a-likes, something called the “Growler Prowler,” and this guy: 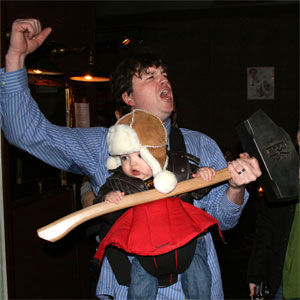 It's okay, he's wearing a helmet.

I’ve run and beered with the Beer Runners, and apart from the Tarahumara and high-school kids fleeing arrest at a kegger, I’ve never met anyone who’s crafted a finer marriage of legs and lager. If you can get your Growler Prowler to Philly on Friday, June 4, you’re in for a blast.