” Barefoot Ted is most definitely one of a kind…” 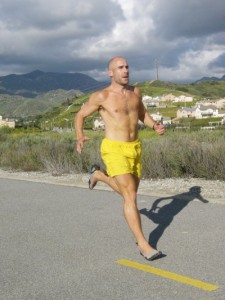 BFT was in Europe recently for a series of barefoot running workshops. Oddly, a guy named Olly signed up for a multi-day, overnight- camping clinic out in the freezing English countryside, even though the last thing he wanted to do that weekend, or any other, was run:

I’ve always been something of a running skeptic and have run very infrequently and inconsistently, perhaps because I’ve never considered myself to be a runner, or any good at running.  Running is just not something I’ve ever really enjoyed…

But Olly began perking up as soon as Ted opened his mouth and let fly in the way that only The Monkey can:

Barefoot Ted is highly inspirational, highly entertaining and very humble, all at the same time.  When he talks, it is difficult not to drop what you are doing and listen along, whether the topic is running or just about anything else.  The lasting impression I got was of a truly genuine man who is deeply passionate about who and what he is and does.  People like this don’t come around all that often.

By the end of the weekend, Olly wasn’t just beguiled by Ted’s oratory; he was a changed man:

Since I’ve been using the techniques I learned in Barefoot Ted’s Introduction To Barefoot Running Clinic, I find myself wanting to run everyday, every time I stand up in fact and keep on having to reign myself in.