In 1996, Yijoo Kwon faced a choice: get in shape, get injections, or die. He was 50 years old and had just been diagnosed with diabetes. But rather than opting for insulin injections, Yijoo began running. At an age when most men are giving up on exercise, Yijoo rapidly trimmed off weight, got his blood sugars under control, and transformed himself into an unstoppable ultrarunner. Since then, he’s tackled some of the baddest challenges in the sport, like the Leadville and Western States 100-mile races. This spring, at age 64 — that’s right, 64! — he set out to run from California to his home back in Queens to raise diabetes awareness. He hoped to average 30 mile a pop and finish in 110 days. But instead, he’s actually AHEAD of schedule. Even though he’s run through storms so severe that his support RV was pelted too ferociously for anyone to sleep at night, Yijoo has uncorked a string of 35- and 40-mile days.  As of mid-May, he’s somewhere in Kansas and heading steadily east. I’m tracking his progress and hoping to join him for some long miles as soon as he’s in range. I just spoke with Jessica Cha, a member of his support crew, and she said Yijoo would love to have more company on the road. “He even likes it when truck drivers do that long BAAAAAAAAAAA with their horns,” she said. You can locate him on his website, and keep an eye on the New York Daily News, which is running an updated story about him soon. 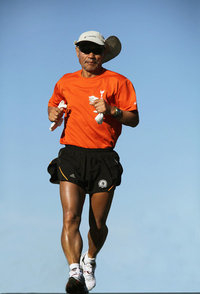 To repeat: this guy could have been a diabetic on Social Security right now: 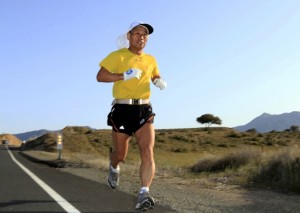