A few months ago, I wrote an article for Southwest Airlines in-flight magazine about the opportunity that natural running presented to running-shoe retailers. The only reason these stores exist is because the owners position themselves as experts. Now that it’s becoming clear that the torque and excess cushioning in modern running shoes are harmful, what are they supposed to do? As a few storeowners have shown, the most lucrative response to the surge in natural-running  is also the most ethical:

Several stores, like Zombierunners in Palo Alto and Playmakers in Okemos, Michigan, were lightning fast to learn all they could about proper running form and pass that info along to their customers. Zombierunners had me in their store as soon as the book came out. They even followed up with a series of barefoot-running clinics with Barefoot Ted. Curt Munson, owner of one of the biggest and most-respected running stores in the country, also brought me in to speak and now runs a free “Good Form” running class in his shops on Wednesday nights. Curt is in a tough position; he’s got a full display of shoes on his walls and does product-testing for Runner’s World’s shoe reviews, yet for years, he’s been running in Chaco sandals and Vibram Fivefingers. I don’t think the dilemma caused Curt any trouble at all. As soon as he had information that might help his customers, he mastered it. When I went to speak at his store on a freezing Tuesday night in October, the place was packed. I’m convinced the turnout was because of Curt, not me; his customers know that when Curt is excited about something, it’s smart to pay attention. Maybe he’ll end up selling fewer pairs of Nike Air Whatevers, but as I saw firsthand, it’s sure not hurting foot traffic in his store. That’s because ultimately, niche retailers aren’t really selling products; they’re selling expertise. Show your customers you know more than they do, and they’ll keep coming through your door to buy something.

Now, contrast that approach to the Mafia-like business model that has dominated running-shoe sales for the past few decades: give me your money, or you’re gonna get hurt. Replace your shoes every 300 miles, or you’re going to get injured. Listen to those barefoot nuts, as the supposedly objective editor-in-chief of Runner’s World warns, and you’ll “get hurt very quickly and have to stop running for a very long time.” But as Runningquest points out, the CEO of Roadrunner Sports will likely look back on his own fearmongering sales pitch some day and cringe: 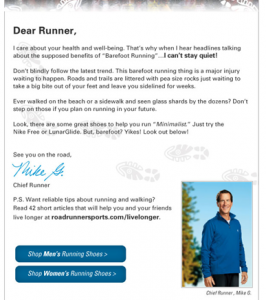